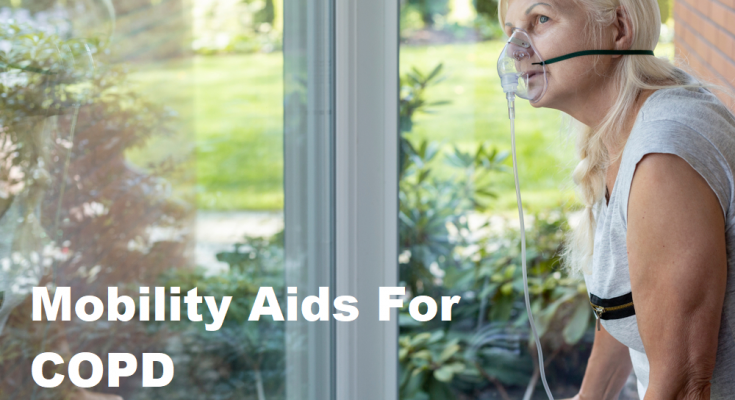 COPD is one of the least known but most debilitating of all chronic illnesses. Ask the average person what problems long-term smokers will face, and most will say lung cancer, few will mention COPD. However, there are around 1.2 million people living in the UK with COPD according to the British Lung Foundation. So, what is it and why is it so debilitating?

COPD is chronic obstructive pulmonary disease, which is the medical name for the combination of emphysema and chronic bronchitis. Emphysema is when the air sacs in the lungs start to break down causing a reduction in lung capacity. Once broken down, the air sacs can never be repaired, so giving up smoking cannot reverse the damage done. Chronic bronchitis is a permanent condition where the lungs are inflamed and attacked by the immune system. Cigarettes contain many toxins and chemicals that trigger an autoimmune response, so the blood vessels in the lungs swell as the body attempts to flood the lungs with antibodies (white blood cells), and the body’s immune system starts destroying lung tissue. This is how the body fights infection, but in smokers, this response can become chronic. While acute bronchitis can be cured, chronic bronchitis is permanent – again, quitting smoking does not reverse the problem. Both emphysema and chronic bronchitis are also progressive diseases, in that over time, the condition gets worse unless action is taken.

Both of these conditions are so prevalent in long-term smokers that health scientists have determined how many cigarettes will lead to the condition. 90% of COPD cases are seen in people who have smoked at least 20 pack years. A pack year is defined as smoking the equivalent of one packet of cigarettes a day for one year, so 20 pack years would be smoking 20 packets of cigarettes a day for one year, or more realistically, one packet a day for 20 years. Somebody who has 10 cigarettes a day would therefore take, on average, 40 years to develop COPD. This may sound like a long time, but for those who start smoking as a teenager, COPD can start to develop during their 40s and 50s. Most people are diagnosed in their 60s.

The reason so few people are aware of COPD is because it is the hidden disease. As it progresses, people simply stop leaving the house – only close family members and carers are aware of the condition. As well as the physical problems it can cause depression, and many people feel ashamed that they can no longer leave their house without aid, so the result is people become isolated and cut off from society. For this reason COPD is often called the silent killer, or the hidden killer.

How is Mobility Affected?

Quite simply, people become out of breath and struggle to walk. In the early stages this just feels like you’re losing fitness and struggle to walk quickly, or for as long as you used to walk. But as the condition progresses, walking any distance can become a challenge. In the most severe cases people no longer have the lung capacity needed to walk at all, and even talking becomes difficult. In the most advanced stages (stage 5) people need to use an oxygen cylinder every few words they speak. Eating also becomes a huge challenge as people become out of breath while chewing. Also, the lungs actually expand as they deteriorate and take up more room, pushing the stomach down and this makes eating uncomfortable for many people.

As well as poor lung capacity and difficulty breathing, COPD causes, and makes worse, other conditions, such as arthritis, asthma, diabetes, and increases risk of stroke. Cognitive function can also become affected due to lack of oxygen getting to the brain, and this can become worse when active. Legs and feet can also become swollen due to physical inactivity, which further reduces natural mobility, worsening the condition further. 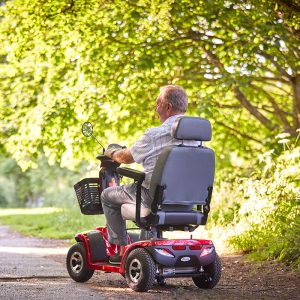 If you have been diagnosed with early stage COPD then it is a good idea to first try a rollator with a seat, which will support your weight and therefore make walking easier. This will help maintain some physical fitness while you manage your condition.

If you have more advanced COPD and struggle to walk a mobility scooter is the best option. While using your scooter to go to the shops or attend appointments, you will not be putting your lungs under any additional strain, so will be able to communicate better with people, and the risk of confusion is lowered, which will reduce anxiety.

For those who find it hard to walk around the home, then a powerchair might be required, and these can also be used outdoors, although do not have the same range as some mobility scooters. If you use an oxygen tank then you can get holders that will fit most wheelchairs and mobility scooters.

Many people find that regular exercise helps with their condition, so the more active you can remain, the better equipped you will be to manage the disease. COPD cannot be cured, but with early intervention combined with the use of mobility equipment, you can continue to live an independent life.

For more advice on living with COPD see the NHS’ Living with Chronic obstructive pulmonary disease and the British Lung Foundation’s 6 tips for living well with COPD.

Jon Wade
Jon Wade joined CareCo in 2019 to help develop and grow the website side of the business. He has been a health blogger since 2006, worked as Content Manager for a leading digital marketing agency for 4 years, and holds a Certificate in Health Sciences from the Open University. Jon also enjoys reading and watching science fiction in his spare time.